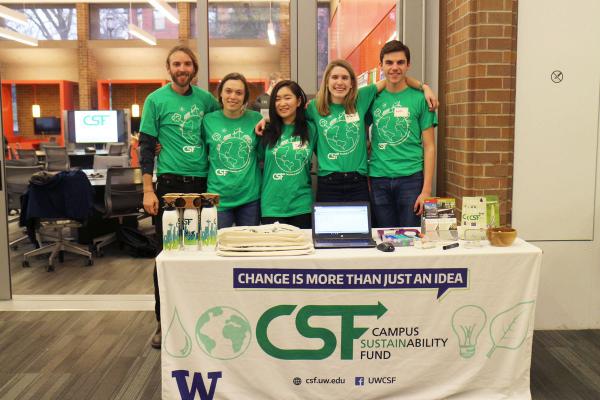 By Michael Kim
The Daily

The Campus Sustainability Fund (CSF) hosted a brainstorming mixer last Friday, bringing together a wide variety of recently funded projects under the singular ideal of sustainability.

The CSF is a student-run and student-funded organization that provides grants to sustainability projects across the UW. Initially started in the 2010-11 school year from a student-led grassroots campaign the year prior, the fund now allocates hundreds of thousands of dollars in project grants every year.

The fund gives the UW community an opportunity to implement their sustainability ideas to affect a positive environmental impact on campus. The panel of voters that decides on grant proposals mainly consists of students. Preference is given to projects that feature student leadership, participation, education, and impact students’ lives.

The first half of the event featured recently funded CSF projects.

Zoe Frumkin, a member of the ASUW Student Food Cooperative, said they received a $2,500 grant to start a bulk-buying store in the HUB for organic and local foods.

“The money has allowed us to buy a lot of the infrastructure for the store, which has been great because it allows us to get the best possible goods that are going to last the longest,” Frumkin said. “And also [CSF] are just a really supportive team that will reach out to you and sort of keep you on your toes so that you make sure you’re keeping up with your project, but also always offer support and advice.”

The team is running an ongoing survey to gauge student interest in various food items.

Michael Bradshaw works for grounds management, which has two ongoing projects with CSF. The first is a compost facility for green waste on campus. The second, more recent project is a salvage wood program to reuse felled trees.

“All of the trees on campus, when they were cut down, hundreds of trees, we would just pick them up and throw them in the trash bin,” Bradshaw said. After receiving funding for a sawmill and solar kiln, “we take the wood, we cut it up, we dry it, and then the carpenters on campus will build it into all these usable products.”

“Last year we built a hoop house to house all of our plants with the CSF budget,” Greene said. “They were good enough to give us another grant for this school year, and we have been building an education program as well as a management plan for the nursery with that money they gave us.”

The second half of the event was devoted to thinking of sustainability issues in areas such as water, renewable energy, built design, waste management, and food systems. Potential solutions to problems from current as well as hypothetical future projects were discussed.

One of those current projects involves a team constructing a sculpture of a sea turtle made entirely from discarded water bottles found around the UW. The team hopes to display the piece to raise awareness around issues of plastic waste in oceans and its toxic effect on marine animals.

The application deadline for a second round of funding is fast approaching. Letters of intent for larger projects are due by March 27, the last opportunity to get this funding this academic year. Email CSF at uwcsf@uw.edu for more information.