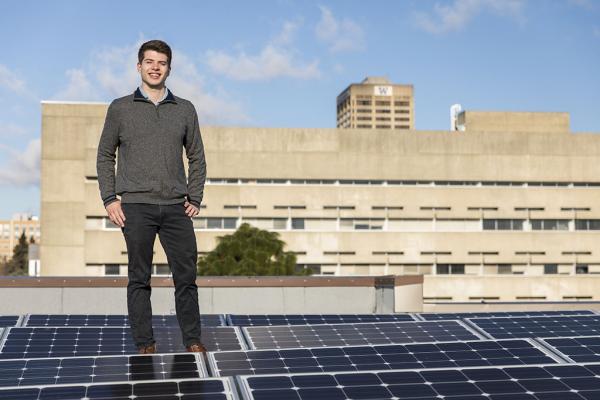 One of the biggest CSF-funded projects will officially be starting construction this summer! The Life Sciences Building Rooftop Solar Array-Supplementary project will install a 100 kW solar array on the Life Sciences Building that can generate 105,000 kWh a year for the university. Below is an interview with the project’s lead of the past three years, Alexander Ratcliff.

Dream Job: To be involved in large-scale projects that will do a lot to combat climate change

How would you describe the effect of solar panels to people who aren’t as familiar?

The simplest way to describe it is, it converts sunlight into energy by using the photons in sunlight to excite other electrons within the panel. As those electrons move up and down, it creates a direct current into the solar panel, and then you use an inverter to change that direct current into an alternating current, which is what buildings use for energy.

Why did you choose the Life Sciences Building?

My freshman year when I joined UW Solar, they were in the midst of working with the architects for the Life Sciences Building. There wasn’t originally a rooftop system proposed for the building. There was always the hope that there would be one, but they didn’t have the funds in the original project. After [working with them] I actually stayed on the project working on their water resources - they have a reclaimed water line from the labs to use in the greenhouse - so I stayed working with the building for about an extra year, and with that, spoke to the architects and ended up coming up with this idea for a larger rooftop array. We just recently got all the funding, which we’ve been working towards getting for about three years now.

UW Solar had previously installed solar panels on dormitories in West Campus. How has that been working out?

That was our first really big project, [it happened] before I joined UW Solar, before I even came to the university. It was a small array on one of the Mercer Court buildings. In 2016, we did an even larger project and collaborated with the Clean Energy Institute to test out new microinverters. They were these new devices coming out of Korea that were considered to be smart inverters, so they were could automatically adjust to how much energy was coming in, and the Clean Energy Institute was really interested in testing these. We got a large grant from them, as well as the Department of Commerce and a few other groups, to make a large enough array test bed to test out these new microinverters. We were able to span 100 kW over Elm Hall, Alder Hall, and Maple Hall. That’s kind of been our flagship project for the last couple years, it was the last one to be constructed. The Life Sciences building is next in line!

What made you choose solar panels instead of other renewable energy techniques?

So it happened before I joined, but the story that I’ve heard from our director Jan Whittington is that there was a student in the College of Built Environments who approached Jan and said there was a lot of roof space in the university campus and almost none of it is being used. There were a few green roofs, but for the most part it’s just wasted real estate. The idea was to take the extra space that was already there and put solar panels on them, and it expanded from there. We’ve actually done feasibility studies for other technologies, like well systems, geothermal, and all that, and that’s been a component of a few projects we’ve worked on as well. So we’re not specifically limited to solar, but that’s our main work.

What kind of maintenance is required for the solar arrays?

It’s actually really easy, you just have to clean them about once or twice a year because of all the dust and bird poop. Most of the solar panel warranties last about twenty years, so if anything happens, most solar panel companies will replace the solar panel units for free, so it’s a pretty good selling point for most people, especially for universities.

Are there any concerns about installing these panels in Seattle, a city not really known for constant sunshine?

That’s actually a question we get asked a lot! Actually, Seattle is a prime location for solar panels. Obviously, places down south like Arizona are better, but almost all of the light spectrum that solar panels use still come through the clouds. Our climate is really similar to that of Germany, and Germany is the largest solar producing company in the world in terms of energy. They get around the same amount of cloud coverage and are about the same temperature as we are, so even though we do have cloudy days, we’re still generating quite a bit of technology.

Do you have any more plans to add more solar panels to other buildings at UW?

On deck right now is the Life Sciences Building, and besides that we’re working with UW Transportation to help electrify their fleet and install different types of solar canopies around campus. We’ve also got projects lined up with the new North Campus dorms, the new Burke Museum, and with the new Population Health Facility. When all those buildings are completed, we’ll start working with them, but for right now they’re on hold for the future.

How did you get involved with CSF?

My first time working with CSF was working on the West Campus dormitory solar arrays when we approached CSF for funds for that project. [After that,] the water systems project with the Life Sciences Building was also a CSF funded project, and after we completed the BIPV (building-integrated photovoltaics) portion of it, CSF actually reached out to UW Solar and asked if any students were available to take on the project. The project itself didn’t have a student lead yet, although the money had already been approved, and I volunteered. It was my first time being a project lead with CSF, and since then I’ve worked on three or four applications with the organization.

What message to the community do you hope to convey in your work?

There’s a lot of opportunities to get involved in really important projects on campus that people don’t know about. That’s one thing that I always to people who ask for advice: if you’re passionate about something, you really just have to go out and look for it on campus, because I can almost always guarantee that there’s someone that’s doing the same thing and there’ll be an opportunity for you. And CSF is such an underutilized asset, the fact that it’s students-supporting-students with these really interesting projects is really awesome, and I’ve always been a huge fan of them.

What advice do you have for students who want to get started with CSF, UW Solar, or anything concerning environmental health?

Go out and look for what you’re passionate about! Don’t be afraid to email someone, like a professor, to ask about a position. Half the people you ask might brush it aside or something, but the other half could point you in the right direction. There are lots of opportunities on campus, you just have to find them.