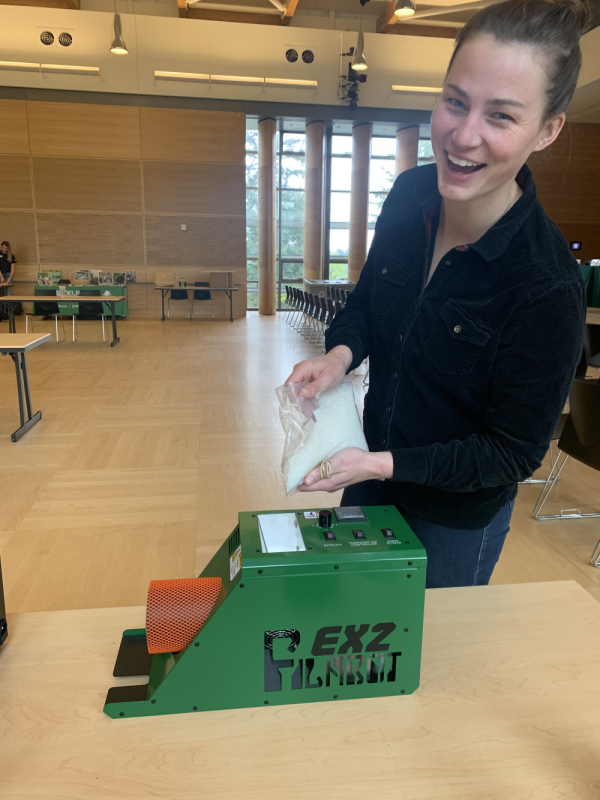 The following shows a conversation with Katy Ricchiuto and Micah Stanovsky of the Precious Plastic project with added commentary from Emily Coleman, another project lead who was unable to attend the intervie

How did you first hear about the Campus Sustainability Fund?

Katy: Emily, who is in the same graduate program that we are in, learned about it through a UW staff member who is connected with the recycling department and pulled us in.

Micah: The first time I actually heard about the Campus Sustainability Fund was Winter Quarter of 2018 when I was TAing a class in the ESRM program and two staff came and presented about CSF, so that was what actually put it on my radar. Then Emily wrote us and asked if we wanted to get involved.

Emily: I heard about it first through the UW Sustainability website.

What inspired you to create this project? Were there any local environmental issues that led you to see a need in our community for your project?

Micah: So our project is a UW specific iteration of the Precious Plastic model which already exists, so it’s only fair to say that Dave Hakkens came up with the templates for machines. You can make the machines for relatively cheap that will do the basic process of grinding plastic down, melting, and molding it into other stuff. Then Blair, who works in UW recycling, was interested in that project and posted to a CSF forum about getting students interested in waste reduction and close-loop cycles.

Katy: One of the things that drives the work and research that we’re interested in is the China Sword issue, which is how in 2018 China tightened their restrictions quite significantly on the amount of recycling that it’s going to accept from the US so that it has to be really clean for them to accept it. In our waste streams it’s impossible for us to meet those standards, so more or less the state of Washington can no longer ship the majority of their recycling to China. It’s creating this huge issue where people are recycling and a lot of it is going to landfills; but it’s also an issue both industrially for institutions that are shipping their recycling, which now has nowhere to go, and also for individuals. The goal with the project is to educate people on what actually happens to plastic when they throw it away or recycle it, and also to introduce this new model that’s a close-loop system. We’re taking plastic out of the waste stream and we’re creating products with it that can be reused throughout campus, so it’s reducing the need for virgin plastic as well.

Emily: With China’s National Sword and our region’s recycling markets collapsing, I had been looking for a way to initiate a project to reduce waste on campus. Fortunately, I stumbled upon a post from a UW staff member, Blair Kaufer, wanting to bring Precious Plastic to our campus, and we were able to recruit a great team of passionate people to make this project a reality.

Micah: A close-loop system is basically the idea that whatever you use becomes whatever you are going to use next. We have the habit of having this waste stream that starts with resource extraction, then we make a thing, use the part of it that’s useful, and then send it somewhere to go away. The idea is to make that less linear and more circular so that you would be creating less waste and having a smaller environmental impact. This is done by reincorporating what is traditionally thought of as waste to be sent downstream and putting it back into an upstream process, so that it is reprocessed into a valuable part of the next form of consumption.

Katy: It’s mainly materials based but you can also think of it geographically or from the perspective of carbon emissions. The fact that we’re collecting and processing plastics here is important in the sense that we’re not expending a bunch of carbon emissions to ship it halfway across the world just to be broken down and then shipped right back.

Emily: Recycling can’t just be about collecting materials. We also need to integrate these materials back into the products we use and purchase. A closed-loop system brings these used materials back into the manufacturing process, so we reduce our dependence on virgin materials and reduce our need to deplete natural resources. We want students to think about this whole process when they make purchases decisions, so they both support the recycling system and lessen their material footprint.

Have there been any unexpected obstacles you have experienced in implementing your project? If so, how did you overcome them?

Micah: The biggest trouble is navigating UW systems just because it’s so big, each department has its own operations that aren’t necessarily aligned with other departments operations. The biggest challenge early on for us was figuring out what department could host us, like physically where we could operate because its a very physical project. Since then its turned into how do we get to where we can spend the money that CSF awards. We’ve experienced a fair amount of administrative hurdles so far, which is totally fine but for anyone starting a project I’d say expect that and start working on it early.

Katy: A couple bigger picture challenges are thinking about how to operate machinery safely, writing the safety protocols, and working with the right departments. Also generally you think you would just collect plastic and put it in these machines but you actually can’t. The first step is you put the plastic in this machine that shreds and makes it into little pieces, then you put it into a machine that compresses and melts it down, and lastly you put it into a machine that forms it around a mold or spins it into filament. The problem is that if you put different kinds of plastic into this compresser to melt it, it will explode if it’s heated at the wrong temperature and all plastic melts at different temperatures. That’s a challenge we haven’t necessarily encountered yet because we don’t have all of our machines made, but really thinking through the science behind what’s the appropriate type of plastic to work with first and what can we make it into safely.

Micah: Assuming all of the administrative stuff I talked about works itself out eventually- we aren’t scientists ourselves, we aren’t physicists, we aren’t material scientists, we don’t have the sort of technical skills and knowledge to do this project. What it’s really going to take as this gets off the ground is folks who do have that expertise to help us out. If there are folks out there that are interested in this kind of thing and know a little about material science or just even have a better general skill set to where they can learn about it quicker than we would, that would really speed things up for us.

Emily: It was very difficult to find space and to understand the complex UW system when reaching to departments regarding space. We reached out to everyone we could and followed up on every lead. Eventually, we lucked into a great partnership with HFS, which was excited about the potential of the project.

Given that your project is centered around the environmental problem of waste, how does plastic waste act as a barrier to creating a more sustainable society?

Micah: Virgin plastics, which is the term used for new plastic material that is being produced, is incredibly carbon and resource intensive to make so at the very outset they have a pretty big environmental impact. If we reduce the amount of virgin plastic that is being used it will reduce the environmental impact from the outset. Then there’s also the question of where are we and how far is that from where plastics are being made so that transportation line, the distribution system of plastics, is something that could be greatly reduced by keeping as many plastics on campus as possible, repurposing them. If there is something that comes to campus and then leaves campus it most likely goes to a landfill, so if we can keep it out of the landfill by replacing one thing that would go to the landfill with something that is staying on campus and serving a second purpose, then that really helps us reduce the downstream waste as well. To the extent possible we’ll be reducing waste at the production level, distribution level, and then at the waste management level.

Katy: I think the carbon emission question around plastic really a good one. Then there’s the whole equity question: we ship a lot of our stuff to Asia and so the countries there are burdened with all of our waste and what to do with it. Yes they’re breaking it down and selling it as a commodity, but they still have all the environmental and economic effects on the people who have to work in that industry. Most people assume that their recycling goes somewhere, and they don’t actually know its going on a boat and getting shipped over to Malaysia or Vietnam, previously China. The fact that there are no facilities in the United States, especially in the Pacific Northwest, to process them and make them into feedstock for something else means the market needs to grow here, and I think it will now that there is no other option. But because of the cost, markets, and since people want to do things for the lowest cost they’re still going to ship things to Asia.

Micah: There’s also the question of how much waste escapes our waste streams and makes it into the environment. I’m sure a lot of folks have heard about the garbage patch in the North Pacific, there are a few different places where there is just garbage afloat in waterways. Then you’ve also seen all the dramatic pictures of salmon, birds, and things with plastic waste in their digestive tract, which are really problematic obviously. Hopefully we’ll be contributing to a culture that is more cognisant of waste reduction and the detrimental effects of plastic.

Katy: Also 80% of people still rely on fishing for sustenance and they’re eating animals that have absorbed microplastics or are eating microplastics, which is a big issue too.

Emily: Plastic is a material that has a lot of great properties that can have environmental benefits: it is lightweight, reducing the amount of fuel needed in transport; and it can protect and preserve, reducing damage and spoilage. It also takes on many shapes, sizes and chemical structures, making it very difficult and costly to recycle. These factors lead to low recycling rates and much of this waste clogs our landfilled or ends up in the oceans. Reducing this waste doesn’t just protect these spaces, but it would also protect the natural resources we would pull from for virgin materials.