Digging up answers by digging into trash 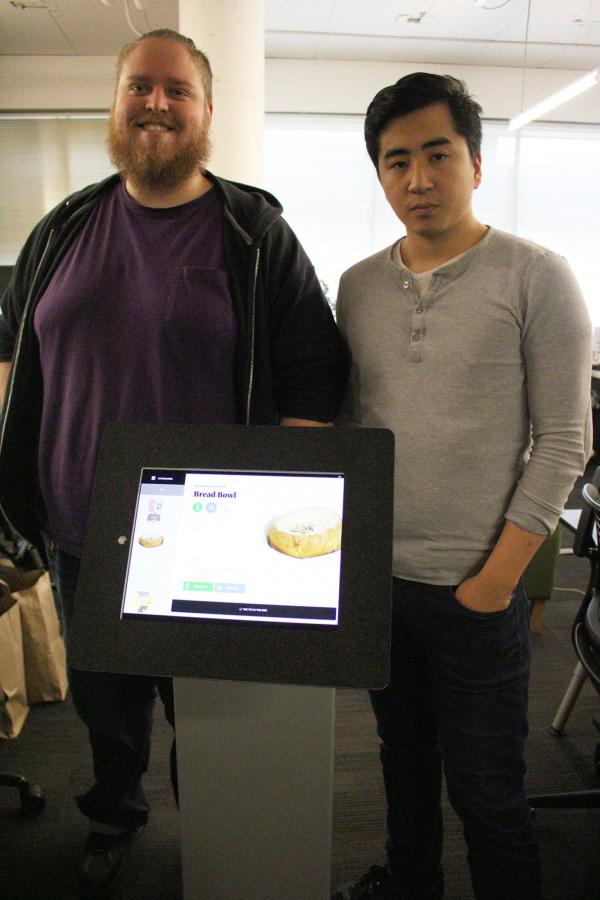 Jacob and William with the EcoTab, which will help streamline an individual's garbage disposal process.
Thursday, January 26, 2017

By Abigail Sloan
The Daily

As much as Seattleites love to brag about how much we compost and recycle, there’s no denying that sorting trash is no easy task. How many times have you been in front of a garbage can asking yourself whether or not the piece of plastic you have in your hand is biodegradable, recyclable, or just something to chuck in the landfill?

Using a grant from the Campus Sustainability Fund (CSF), a local startup called EvoEco, founded by former UW student William Zhou and University of Chicago graduate Derek Gasaway, is pairing up with UW Recycling, the UW Garbology Project, and students from the department of anthropology to see just how effective people at the UW are at sorting their trash from their compostables.

While people tend to see landfills as an environmental issue, and they most certainly are, Zhou argues that the lack of thought people put into trash disposal can have other consequences as well, especially for students.

“At least from a financial perspective, landfill is a lot more expensive than compost or recycling,” Zhou said. “So students are best incentivized to throw away their garbage in compost or recycling because it’s going to save the university a lot of money, and students pay a disproportionate amount of fees for their waste.”

EvoEco’s product, the EcoTab, is software built for tablets that helps educate users on how to dispose of waste. By scrolling down a list of items and products, which can be customized to suit different locations, users can select what they want to learn more about. The software goes as far as to break down items, listing what inside each one is compostable, recyclable, or needs to be put into a landfill.

“There wasn’t really a solution to figure out what is and what isn’t recyclable or compostable and we felt like we could build something with our technology skills,” Zhou said.

Waste audits will be conducted at Lander Hall’s Local Point before and after the installation of the EcoTab at several locations in the dining hall, comparing the rate of waste diversion from landfills to see how effective their product actually is at educating consumers and changing how people sort their trash.

“So if you’re examining landfill for example … you pull out all of the things that could’ve been recycled or composted, what percentage of the stuff that you have left actually should’ve been landfilled and how much of it should’ve been discarded otherwise?” Drexel said. “It’s a way for institutions to figure out how effective their efforts at waste diversion, specifically, but their efforts in education and sustainability are going.”

EvoEco’s mission resonated with the CSF, a student-run grant organization whose $13,000 grant made this waste audit project possible.

The CSF grants funding to projects that aim to create a more environmentally friendly culture on campus as well as lessen the negative impact the UW has on the environment. With its funding coming from student tuition fees, the CSF focuses on projects that foster strong student involvement.

“This is a way for students to be empowered in creating a more sustainable campus,” CSF outreach coordinator Veronica Guenther said. “[It allows students to] have access to resources and make a difference in a way they wouldn’t otherwise be able to do.”

This is the first time the CSF has given a grant to a startup for a project. Guenther was excited by the possibility of helping a project whose lifespan may go past the CSF’s short-term funding.

“That’s what we think is exciting — kickstarting things that wouldn’t otherwise get voiced because they don’t have the resources,” Guenther said.

She hopes that the visibility of projects like these will also help inspire more students to bring their ideas for a more sustainable campus to life through the CSF grants, especially as the March application deadline for large projects fast approaches.

“I think if you let ideas bubble up in a grassroots style and come to fruition, you get more creative and passionate ideas,” Guenther said.

The waste audits are planned to begin the week of Jan. 23 with the EcoTab set to be installed in the middle of February. The project as a whole will wrap-up by the end of winter quarter.