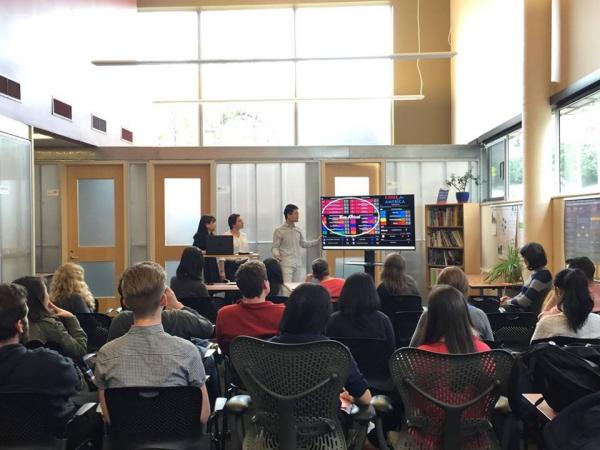 Last Wednesday, students in the Program on the Environment (POE) and Community, Environment and Planning’s (CEP) jointly-offered Grant Writing Practicum class (ENVIR 495E/ CEP 498A), presented their projects in Wallace Hall to showcase the quarter’s efforts. Students were given 10 minutes to present their proposal, followed by five minutes of Q&A with an audience consisting of faculty, CSF Committee and staff members and fellow students. The goal of the class was to help students develop their grant writing, project development and project management skills to specifically address sustainability issues on campus. CSF interviewed Professor Frederica (Freddie) Helmiere, who taught the class for the first time since its inception last winter. When asked if she thought using CSF as a model for a grant was an effective teaching methodology, Helmiere said this was an interesting point of contention— and that it was “a blessing and a curse, but mostly a blessing.”

“On one hand, many students appreciate how CSF is a local, accessible and tangible funding source that they were fortunate to have at their disposal to practice grant writing. The open line of communication between the fund and students, advisors and past and current CSF project leaders really benefited them,” Helmiere said. “However, on the other hand, as the quarter progressed, some students expressed a preference for a broader perspective to practice grant writing for other purposes, such as research.”

Four out of six project teams ended up submitting LOIs to CSF, including Permaculture for the People, Tap That, New Media Student Engagement at UW, and Real Time @ UW, making for an even more exciting round of deliberation for the Committee at their meeting last Friday. Thanks to all who applied!

The six project ideas are briefly summarized below:

Permaculture for the People
This project will create a space on campus by the Burke-Gilman Trail designated for the implementation, and experimentation, of permaculture--a method of agriculture incorporating perennial and native plant polyculture--and permaculture design with a focus on its how it can be successfully incorporated into urban agricultural systems.

Tap That
Mimicking the banned sale of plastic water bottles at Seattle University in 2010, students proposed collecting 6,000 signatures by the end of this year (or roughly 13 percent of UW’s student body), as a first step towards the ban.

Real Time @ UW
Similar to the smartphone application OneBusAway and the existing TransitScreen display up and running in Paccar Hall, students proposed the installation of eight additional screens and one projector providing real-time information about bus schedules as well as bike share and car share programs around campus to encourage commuting.

Water Fountains Without Waste
Two students conducted considerable research on the use of water fountains at Thomson Hall and proposed eight water fountain upgrades, as well as improved signage about Seattle’s stellar water quality. Their new and improved “Elkay Fountains of Tomorrow” would encourage water sustainability education and the reduction of plastic water bottles, similar to Tap That.