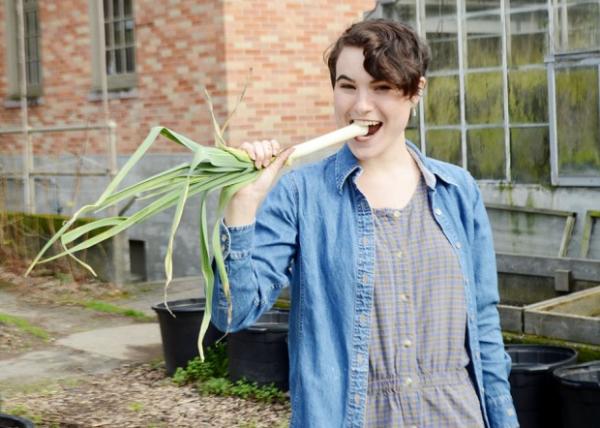 Dani Gilmour describes herself as a former junk food fiend, something one wouldn’t expect from the coordinator of Husky Real Food Challenge (HRFC).

Since she was a child growing up in Cheney, Wash., she has known she wanted to address climate change, but food production had never occurred to her as something that has a significant impact on the environment. Gilmour attributes her newfound interest in food to the food-related classes at the UW and opportunities to volunteer at the UW Farm during her first year on campus.

“Coming to Seattle, that’s when I started to care about food,” Gilmour said. “Which is so weird to think that I came from an area that had a lot of agriculture, but literally never thought that I would care about food at all … But then once I started realizing how much food was connected to the environment, that’s where I entered. That’s when I really started caring about food.”

She has since been turning her interest into active involvement as the coordinator of HRFC.

HRFC, founded in 2010, is the UW’s branch of the national Real Food Challenge (RFC) movement that aims to have at least 20 percent “real food” on college campuses in America. Real food is outlined by four general requirements: local, ecologically sustainable, fair trade, and humanely raised. According to Coral Mercado, a member of HRFC, only one requirement has to be met for a food to be considered real.

Because the UW already has a relatively high amount of real food, estimated between 16 and 20 percent, HRFC is challenging the UW to aim higher and reach 25 percent real food by 2020. To do this, the group wants to collaborate with Housing and Food Services (HFS) to source more foods that meet real food standards.

To ensure this, HRFC is hoping the UW will sign the Campus Commitment, a contract of sorts created by the RFC that would act primarily as a public statement encouraging individual universities to reach real food goals in ways that make the most sense for each school. Several schools, including Gonzaga University, have already signed on.

Emma Rose, media coordinator of HRFC, said, “It ensures that student voice, faculty voice, worker voice, everyone involved in it, not only has a say in how we’re going to change, how we’re going to meet this goal — but continues to have a say well after [current members are] gone.”

According to Gilmour, though the Campus Commitment technically only requires a signature from the university president, it is important to work closely with and have support from HFS because HFS will be directly impacted.

However, the commitment does not call for any existing HFS policies or contracts to change, but for future discussions to include language about the UW’s real food goals.

The Food Systems Working Group (FSWG), a food policy council comprised of UW community members, will be the center of collaboration between HRFC and HFS, identifying what students want in real food and suggesting how that can be provided on campus.

“I just think it increases collaboration and makes the process a little more transparent for students who have questions and who want to share their input,” said Sophie Solomon, manager of the ASUW Student Food Co-op. “As students, we’re paying tuition dollars here, so getting a conversation started about the food on campus is really important.”

However, HRFC recognizes that HFS is a professional sphere and must meet practical business demands.

“We understand that budget and value are a very serious thing,” Gilmour said. “That’s why we are so excited to start having these conversations, because we’re ready for them to say, like, that’s not feasible. And then we figure out another way to do it.”

The FSWG would also strive to provide information to help HFS make decisions about where it sources food. An existing example is a survey HRFC is running until Feb. 15. The main point of the survey is to determine which aspects of real food students value and whether or not they would dine more often on campus if those values were reflected in campus food.

“This is a question that HFS really wants to know if they’re going to change anything,” Rose said.

“Being a conscious consumer is great — I’m all about it, you know,” said Nathan Bombardier, HRFC outreach coordinator. “But we need to give people the resources to be a conscious consumer. I think it’s kind of a simplistic answer to say, oh just buy better food to support local farmers, and the problem will fix itself.”

Bombardier believes a more systematic approach needs to be taken — which is why HRFC hopes to bring more real food directly to students’ dining options on campus.

According to Gilmour, educational institutions possess the biggest buying power among other institutions, meaning that universities’ food purchasing habits have a big impact on the overall food system.

“This food system that we have, that’s quite broken, is monetary,” Gilmour said. “And so, the way that it’s going to be changed is through the funds going to support systems that we want to see more of in the world.”

Another expectation of the commitment would be to make transparent the amount of real food available at the UW. The Real Food Calculator, a tool for just that, analyzes invoices to determine the percentage of real food on campus.

Recently, HRFC finished calculating about $2 million worth of invoices from January and February 2013 for all the UW dining units, revealing that the UW has about 16 percent real food. However, the percentage is estimated to be higher because the winter months are not very representative of local produce that HFS buys.

“It’s not bad,” Bombardier said. “It’s a good starting point. That’s why we have our goal at 25 percent.”

If the campus commitment is signed, the Real Food Calculator would be run each year.

Though the calculator did not necessarily provide HFS with new information, HFS administrative staff recognizes its value in relation to meeting consumer demands.

“We have to offer products that we know our students want to purchase at the price they’re looking for,” said Micheal Meyering, HFS sustainability and business manager. “I don’t think that Real Food Calculator really added anything new to what we already knew or what we were already doing. It just allowed us to be engaged with some really dedicated students. I see the real value in that.”

“[With HRFC’s] level of enthusiasm and engagement in the process, they can take that to their peers,” he said. “That’s what would change the feedback that we get in larger numbers, and that’s more compelling for us when we make decisions. … [HRFC] provide[s] a valuable link for us.”

Meyering provided an example of what it could look like if HRFC is able to spread its values to more students.

“So if there were 10,000 Real Food Challenge students, and they all lived in the residence halls, and they said, ‘we want grass-fed beef,’ well sure, [HFS] would accommodate that,” Meyering said.

HFS would like to remain flexible to change business practices as it sees fit, addressing what Meyering refers to as the ebb and flow of students’ concerns with cost versus sustainability of food on campus.

Meyering said signing the Campus Commitment doesn’t seem necessary, because HFS values already align with those of HRFC. However, Gilmour believes this fact should be further publicized.

“If they’re going to go for it, why not brag about it?” Gilmour said. “ … People look up to the UW as leading our area of the nation … So, if UW values real food, that’s a huge step.”

Gilmour stressed that the Campus Commitment is not intended to be a binding contract, but rather an official way to open the dialogue about food at the UW.

“It’s not gonna lock us into something,” Gilmour said. “It’s really just the start of an amazingly collaborative and exciting goal that we’re going to make together and reach.”

Correction: In "Keeping it real" on Feb. 11, it was incorrectly stated that the UW would be the first Campus Commitment signatory in the Pac-12. However, the University of Utah has already signed the Campus Commitment.