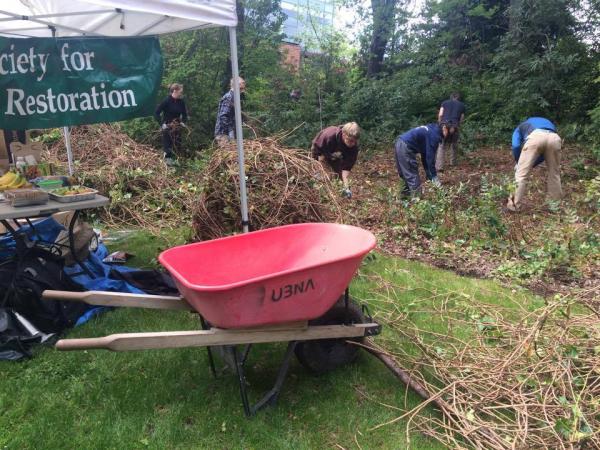 On Friday April 24th, 19 volunteers helped to clear a patch of English ivy in the green belt behind PACCAR Hall. Lead by ESMR major Ben Sari, they cut away at this invasive species for several hours before completion. Volunteers came from several corners of UW, drawn together from Facebook posts and tables at Earth Day in Red Square.

There were multiple reasons for cutting away the ivy, Sari says. First of all, it’s an invasive species; clearing the ivy away makes room for native plants to grow. The thick covering of ivy also housed pests such as rats; clearing the ivy eliminates their home. The ivy also covers the trees inhibiting their growth. This project in particular was intended as a way to give back to the gardening staff at UW, who will later help plant the area with native species such as Oregon grape, wild ginger, trillium and false lily of the valley.

Projects like these ones help contribute to the sustainability of UW. They make a more continuous native forest and vegetation zone here on campus, which contributes to the overall biodiversity of the community. Similar projects have been done in the kinkaid ravine and in Whitman walk, behind Hutchinson Hall. There are plenty of volunteer and intership opportunities if you are looking to get involved, just look up the Society for Ecological Restoration on Facebook or email seruw@uw.edu.