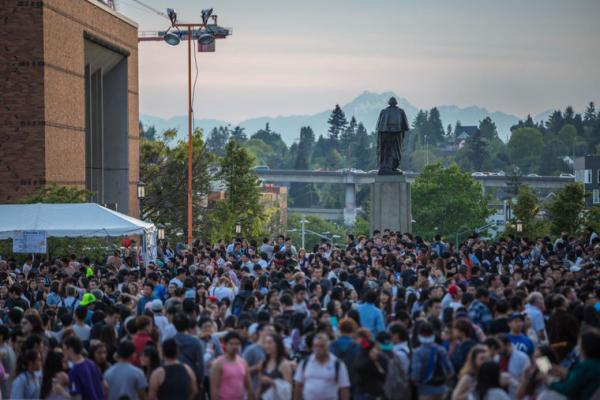 The CSF helped support the UW Night Market put on by the Taiwanese Student Association last weekend to support their recycling and waste control. Read on to see how the event went!

The 15th annual UW Night Market featured 22 food vendors, games, and a full lineup of performances including special guests singer-songwriter Joseph Vincent and seven-member rock/hip-hop group Lions Ambition. Throughout the night, dance crews, singers, and even an Elvis impersonator took the stage in front of Kane Hall to entertain the crowds of people.

This year the UW Taiwanese Student Association (TSA), which organizes the event, broadened its focus and marketing to make Night Market more accessible.

“Taiwan is actually a really small island with a lot of culture mix and we have a lot of Vietnamese and Chinese influence, and nowadays we have more of Korean and Japanese influence,” said Helen Lin Yang, TSA president. “This year in our Night Market, we invited a lot of Vietnamese restaurants and Korean restaurants to incorporate those other Asian aspects within the Night Market … to create kind of like a mixed cultural event, that is accessible to Taiwanese [students] and also others.”

The Night Market reflected that cultural diversity with performances from Taiko Kai, who performed a form of Japanese drumming and Filipino headliner Vincent, as well as with vendors like food truck Bomba Fusion, which serves a blend of Korean and Mexican cuisine.

Despite these other influences, the TSA strove to keep the event true to the elements that made night markets such a famous and popular Taiwanese practice.

“Everything [in Taiwan] is really compact and convenient so there would just be vendors on a street at night,” said Minnie Yuan, internal vice president of the TSA. “Like they would start preparing at four or five and when we got off work they would just go hang out in a night market and eat food.”

This year’s theme, “Yes! Taiwan,” contains a double meaning, Yuan said. It refers both to an exclamation of celebrating Taiwan and the Chinese translation of night market, yèshì, which is pronounced similarly to yes.

The UW Night Market started in 2001 and with its growth has slowly moved from the HUB ballroom, to the HUB Lawn, and finally to Red Square. The TSA has continued to expand and improve on the Night Market’s successful formula.

In response to previous complaints of long food lines, this year it introduced LineCut, a UW student-created website, which allowed customers to order from certain vendors, go online, input their order number and be alerted when their food is ready to be picked up.

The TSA had its own tent where it made and sold staples of Taiwanese cuisine like a drink made with Ai Yu jelly, a gel made from fig seeds, and its famous grilled Taiwanese sausage.

The UW Night Market’s attempts to combine eclectic food and a unique atmosphere to mirror and promote Taiwan’s culture were successful, according to participants.

“This is pretty culturally specific, the way the Night Market is to Taiwan,” said Josh Kong, a UW junior who attended the event. “So in that way I guess you’re experiencing their culture and you get to eat the food.”