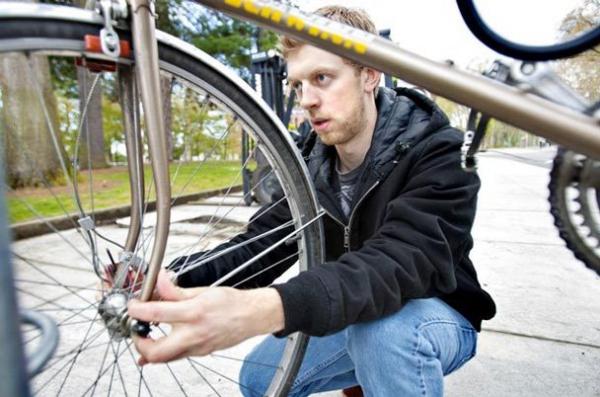 From a student-run farm to fix-it-yourself bike stations around campus, students at the University of Washington have taken a campaign to increase environmental sustainability in new directions over the past two years.

On Friday, during the school's annual Earth Day ceremony, the UW will celebrate its environmental efforts as part of HuskyFest, a three-day celebration marking the 150th anniversary of the university's founding.

Last year, Sierra Magazine — the magazine of the Sierra Club — rated the UW the most environmentally friendly school in the country. The UW scored well on the 10-page questionnaire for getting its electricity from a renewable source (hydropower), but it was also helped by its student-led examination of campus life and efforts to make the school more sustainable, said Avital Andrews, the lifestyle editor of Sierra Magazine.

Students created a Campus Sustainability Fund two years ago, after more than 5,000 students signed a petition asking that a small portion of student fees be used for environmental projects.

In the last year, students have used the money for a variety of projects, including increasing the size of the student-run UW Farm by an acre, boosting campus recycling efforts, and creating five fix-it-yourself bike stations around campus where cyclists can go to tighten a bolt or fix a flat.

In the next year, the fund will be used to create a living "green wall" of plants on the side of Gould Hall, build a bioswale to filter pollutants from stormwater running off a parking lot, and begin composting on the UW campus. Currently, all compost materials are trucked off to a Cedar Grove composting facility.

More than 75 colleges and universities have student-supported green funds, but Jamie Rowe, the Campus Sustainability Fund coordinator at the UW, said Washington's is one of the largest. It's also unique because the money pays for student-designed projects, rather than for carbon offsets, which is what most college green funds are used for.

"One of the most exciting things about working here is the breadth of the projects, and how connected it makes the campus," said Rowe, who is a graduate student in the Evans School of Public Affairs. For example, the bioswale project includes engineering and design students working with the grounds-maintenance department to create the bioswales.

"It's research blending with passion, making the campus more sustainable," she said.

Katie Stultz, a senior who was part of the campaign to create the sustainability fund in 2009, said the program has allowed students to develop leadership skills and learn how to work with the school's bureaucracy to make projects happen, even when red tape threatens to trip up a good idea.

"What it's done for the university is to put students into offices, into places on campus where they've never been seen before," she said.

Later this year, students will raise a "green wall" — a flat frame holding soil to grow native plants — against the concrete wall of Gould Hall. Students will also grow a "green screen" of hops and kiwi vines along one side of the building and will use water collected from the roof and stored in cisterns to irrigate the wall.

"It's a sustainability billboard of sorts, and a huge learning opportunity," said student Leann Andrews of the $86,500 project. More than 40 students, faculty and staff members are involved.

Green walls turn vertical surfaces into habitat for birds and insects, while helping insulate a building, and providing noise attenuation and air filtration. There aren't many green walls around Seattle, Andrews said.

"We've done green roofs, and now everybody gets it — green walls are the next thing," she said.

The sustainability fund also awarded an $80,000 grant to the UW Farm, located near Husky Stadium, allowing it to expand by an acre. Some of the vegetables grown there will be sold to student housing and food services.

Environmental sustainability "is kind of a new measure of prestige," said Andrews, of Sierra Magazine. "High-school students look for good sports programs, a good social life and now they're looking for a good green bottom line."